Let’s start with a story to set the scene around managing and measuring work. 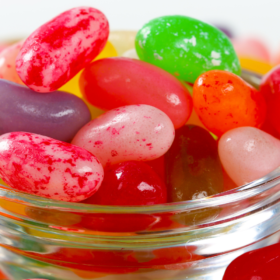 Just because you have over 50 flavours of jelly beans does not mean you should have over 50 types of performance measurement.

You cannot move your company forward and retain a happy, productive workforce if you cannot give them clear, actionable goals and achievable rewards for their accomplishments.

A few years ago, the Jelly Belly Candy Company in the US realised this and decided to do something about it. The company’s biggest problem was that their two operating facilities worked independently, each with its system for doing things. If they wanted to expand the business while still retaining and attracting employees, they needed to streamline and consolidate these systems, which meant creating a single, comprehensive employee handbook and performance review system that aligned the company’s values and principles with those of its staff.

For a company with around 600 employees, this could prove to be a challenge. So how did they sweeten their performance-measurement capabilities, encourage employee retention and increase productivity?
Read on to find out.

BENEFITS OF GOALS FOR MANAGING AND MEASURING WORK

Let us look at how goals can help you manage and measure work.

What are your views on setting and achieving goals?

Most people want to put in a good performance and not waste time – which is why goals are so important. Goals give people something to focus their time and energy on. This then allows them to allocate their time most efficiently and productively as possible.

The power of goals is evident in the life of Jim Carrey. He came from a poor family and struggled as a stand-up comic, doing all manner of side jobs to get by and succeed in the entertainment industry.

In 1990 he set a goal. He wrote himself a cheque for $10 million. In the subject line, he put for acting services rendered. He dated it for ‘Thanksgiving, 1995’. By that date, he had met and surpassed his goal and began receiving $20 million for a movie!

Now let us look at the way you currently set goals for your team.

These skills are the indicators of someone good at managing and measuring work.

Setting goals before starting a project is essential for many reasons. It is also crucial to give people a chance to voice their opinions about those goals and how their efforts to achieve them are measured. Giving others a say over objectives inspires motivation, especially when those goals involve challenging people’s abilities.

Social game creator Zynga empowers its employees by making all of them the CEOs of their jobs. This means that while employees have a lot of autonomy, they are also fully accountable for their outcomes and whether those outcomes meet their priorities and the priorities for the company as a whole.

Okay, let us put some of this knowledge to use by setting an actual goal.

Achievement and structure go hand in hand. By laying out goals and objectives, you provide a solid framework for achieving success while also giving people a roadmap to follow.

Because everyone approaches things differently and in ways that work best for them, it is important to source input from everyone involved when you create this framework. This includes stating the rewards for reaching these goals as well as the consequences for missing the mark. After all, you cannot reward or penalise someone fairly if you have not spelt out what it is they need to do and why; and what the results will be if they succeed or fail.

For example, at US conglomerate Honeywell, performance is measured against two specific and clearly stated barometers: the ‘Five Initiatives’ and the ‘Twelve Behaviours’. Because the company believes in a pay-for-performance philosophy as well as internal rewards (which are tiered according to extent and type of achievement), incentives like raises and recognition hinge on whether employees meet and exceed specific criteria.

When setting goals, it is also important to make sure that what you are trying to achieve is something within your (and the team’s) control. For example, setting the goal to increase sales might involve factors that are outside your control. But deciding that you will make a certain number of pitches or phone calls a day is something you have influence over. This is a far more realistic thing for you to do.

Now let us think about the deadline for achieving this goal.

Process feedback, when coupled with agreed goals, is a great motivator for many people. Here are three reasons why:

In the romantic comedy of the same name, sports agent Jerry Maguire (played by Tom Cruise) needed results. His key player (and only client), Rod Tidwell (played by Cuba Gooding, Jr), was not ‘performing’, and neither man was getting what he needed. In a fit of desperation, Maguire pleads with Rod: “Help me help you!”

Though Maguire’s tactics might have been overly dramatic, the result was ideal − both men spoke openly about what they needed from the other to achieve their goals. Finally! Something on which they could lay a foundation and start making those goals a reality. And all it took was to ask for and give feedback.

Make giving feedback easier for yourself by setting up specific checkpoints along the way, which you can use to gauge levels of progress. And remember − when it comes to feedback, the more you give, the better!

Finally, let us consider what could go wrong as this goal progresses.

Change is inevitable. So how do you handle it? The best policy is to always be flexible and ready to make a new plan: anticipate, prepare and adapt. Just like award-winning director Steven Spielberg.

While filming Jaws, Spielberg ran into problem after problem with the production’s mechanical shark, which had an issue with its role as the ‘bad guy’ and did not want to work.

But rather than let this stop production, Spielberg used the fake shark’s refusal to co-operate to his advantage. He did not attempt to show the shark at all in the film until almost halfway through, which not only bought him more time to get the fish finally up and running but also helped to increase the movie’s dramatic tension. This is a case of letting circumstances dictate a better outcome!

By bringing in an outside firm to revamp their performance review system, US candy giant Jelly Belly was able to completely overhaul and consolidate two different performance measurement systems into one comprehensive and efficient process.

Their single system now gives fair, accurate and comprehensive performance reviews annually. It compensates employees based on specific performance criteria and helps promote from within – something this family-run business strongly believes.

The new system’s interactive, user-friendly style gives it a more informal and inclusive feel and allows employees from all levels to feel like they are part of the company’s processes. Plus, Jelly Belly offer cross-training for their employees, education reimbursement, profit-sharing, competitive pay, and a fun working environment.

Now the company’s employees have a clear picture of what they should be working towards and why, and how their worth is measured. Isn’t that just sweet?