When engaging in negotiating, the ideal aim is to achieve a ‘win-win’ deal for both parties.

That way, everybody comes away feeling like their needs is met by the end of the bargaining process.

There will be times, however, when the win-win approach to negotiating will not be a priority. If you never intend to engage with the other part again, you may choose to use a more aggressive approach. In that case, you may choose a more aggressive form of negotiation where one side tries to get the better of the other. An example is when people buy and sell property, often making this kind of bargaining a rather stressful experience.

This is not the only way that negotiation styles must adapt to different situations. When the stakes are high, for instance, it might be worth preparing for negotiation by planning your hand and reactions and engaging in a certain amount of ‘gamesmanship’ to get ahead. For example, people with experience in major negotiations might act shocked or offended at an offer – even if it is better than expected.

Remember, these kinds of approaches are not good for resolutions that seek to foster healthy recurring relationships. If you win a round by adopting an aggressive attitude and the other person experiences a loss, then this technique could come back to bite you in future negotiations.

Using deception or manipulation erodes trust and prevents good working relationships, so it is a good idea to refrain from these approaches if you foresee having future dealings with someone. Getting your way in a win-lose manner may work if you do not negotiate often with someone. When there is an ongoing collaboration, being straightforward and trustworthy usually works best. 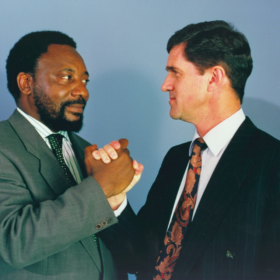 Rapport has played an important part in smoothing the way for some historic bargaining sessions. For example, to forge a stronger relationship on which to build their negotiations, two architects of the post-apartheid era in South Africa, Cyril Ramaphosa and Roelf Meyer, used to enjoy fishing trips together.

The excursions not only broke the ice between them but also built a foundation of trust, especially when incidents occurred that brought the ‘human’ factor into focus, such as when Meyer got a hook caught in his finger and had to rely on Ramaphosa’s help to remove it.

Even if you negotiate with someone regularly, it’s always important to consider positioning and ease into the deal-making process.

Putting two parties on either side of a table creates a dynamic of competition. It is more effective to mix your team members up a bit, for example, seat members of ‘opposing’ teams next to each other around the table. Also, if you are chairing the meeting, begin with an icebreaker or some chit-chat before bringing up the main negotiation. It will give everyone time to connect and ‘get into the room’ before you start in earnest.

As Newton said, every action has an equal and opposite reaction.

So beware of framing the negotiation in inflexible, black and white terms: every absolute will probably be met with an equal and opposite absolute, which will do nothing but waste time, erode goodwill and potentially keep you from coming to a mutually satisfactory agreement.

Rather than sticking a flag in the ground and unilaterally declaring certain territory yours, first, start by making gentler inroads. Rather focus on areas where both parties agree and share a similar stance so you can at least create a common ground from which to build.

For example, during Cold War negotiations with the Soviets in the 1970s, US diplomat and statesman Henry Kissinger used the concept of ‘détente‘ to slowly but permanently ease tensions between America and the Soviet Union. Détente is a concept that means both sides agree to gradually reduce their mutual animosity to a workable level where negotiation is at least an option.

Détente was, in fact, just about the only thing the parties would agree upon. But it was a start, and a good one at that – it certainly contributed to the long-term thawing of relations between the two superpowers. Remember that even people who might seem like they would never agree on anything usually have at least some things in common!

Once you get to some kind of initial agreement in the negotiating process, there are still likely to be some points left unsettled. This is fine. To move forward, first, acknowledge those points and whittle them down to as few as possible. This may entail making concessions here and there. Negotiations can get very creative, so keep an open mind. The myriad ways you might be able to tie up the negotiation process aren’t as important as getting to yes.

Indeed, the world is full of trade-offs. For example, the Kruger National Park is regarded nowadays as an example of conservation, but the reality is that the park was initially set up in the 1920s as a no-hunting wildlife reserve to allow the local animal population a chance to breed and increase their numbers.

But why did the South African government of the time take this measure? The ironic trade-off of setting up such a seemingly noble project was so that the very same animals which managed to recover within the boundaries of the Park could then be hunted once again!

What lesson can you take away from this? For starters, winning is not everything, and stubbornly holding onto a point out of principle will not help you in the long run. Allowing others to secure some advantages here and there – even if the gains are small – enables them to maintain their dignity during the negotiation. This helps to build a relationship between the two of you that is based on mutual fairness.

However, do not give it all away too soon! Making concessions on less important items is okay, but keep the more important prizes as future bargaining chips, only ‘releasing’ them at a later date when you need some leverage at the negotiating table. That way, you’ll keep some bargaining power throughout the negotiation.